Elizabeth’s Great-grandfather (Ben’s maternal grandfather) was Edward Grosvenor (b abt 1828 in Tenbury, Worcestershire). As I started to investigate Edward on family trees on Ancestry & other websites, I began to feel I had followed the White Rabbit down the rabbit-hole, like Alice.
I had to eliminate a number of unlikely connections adopted by over-optimistic genealogists, Many genealogists, particularly our American friends, take a liberal view of family links, particularly if they lead to titled families. So I had to eliminate instances of extreme longevity (an ancestor born in 1122 who died in 1292); time-travel (children born before their parents); & spiritual procreation (children born after their parents had died). Once that was done I was left with a line that went back to the times of Duke William of Normandy that passed the test of reasonableness, if not actual documentation. 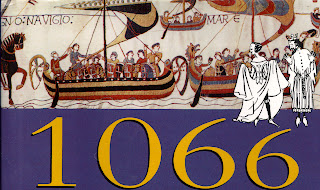 William was accompanied on his invasion in 1066 by his uncle, Hugh Lupus, & his cousin, Gilbert Le Grand Veneur. Hugh was of the d`Avrache family, but could not use the name because his father was still alive, so went as Hugh Lupus (Hugh the Wolf). Gilbert was probably of the de Venables family, but had risen to the rank of Grand Veneur in William`s court. The meaning of Veneur is extremely precise in courtly French. Although in common use it meant hunter, at court it meant huntsman, a subtle difference. A hunter is one who hunts. A huntsman is one skilled in the arts of hunting. The Grand Veneur was the Master Huntsman, one of the most important men at court.
For his services during the Conquest, Hugh was made Earl of Chester, controlling all of what today is Cheshire, parts of North Wales & parts of Lancashire. It was a strategically important area, defending Norman lands from the North & West. In his realm Hugh effectively had the authority of a king. He allocated land to sub-tenants, including Gilbert.
Hugh was not only famous for his ferocity in battle, hence Wolf, but also for his size & was also known as Hugh Le Gros, or as the conquered Saxons would say Fat Hugh. At his death, he did not leave an heir & his lands in Cheshire passed to his nephew, Gilbert. Gilbert inherited not just the lands, but also the family tendency to weight. He had by this time become known as Le Gros Veneur (the fat huntsman), a title he seemed quite happy with as it became the family name. Later on, around the time of Henry III, the name was modified to Le Grosvenor, de Grosvenor & finally Grosvenor. Gilbert is potentially Elizabeth`s 28th Great-Grandfather.
On a lighter note, Hugh`s crest was as might be expected, a wolf, depicted on his arms with a gaping mouth, fangs showing. Unfortunately the standard of graphic art for heraldry was not great at that time (most coats of arms were simple geometric patterns), and the depiction of the wolf became almost a caricature, resembling a grinning cat, Saxon peasants referred to it as Fat Hugh`s Cat. The Grosvenors had a simple coat of arms, a diagonal gold stripe on a blue background. These simple designs were often duplicated in other parts of the country, but provided the 2 families with the duplicated design never came into contact, there was seldom a dispute. However by the 13th C the Court of Chivalry was in full swing. One of the cases heard was Scrope vs Grosvenor for the gold stripe on blue background design. The Grosvenors lost the dispute & were forced to adopt a new coat of arms. However instead of adopting Hugh`s wolf, they elected to adopt the gold wheatsheaf of Chester. So Fat Hugh`s (Cheshire) cat disappeared… 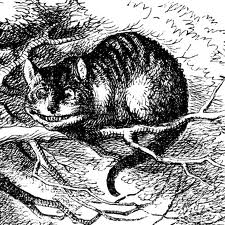 According to at least one historian, Lewis Carroll was aware of this story & it served as the inspiration for Alice`s Cheshire Cat.
Posted by Elizabeth Measures at 09:55